I think it is something to learn that people shouldn’t hate something exaggeratedly because maybe in another point in their life they might be in love with what they hate. Like my relationship with EDM for example.

Like you and everyone else in the world, my music journey varies in many stages. I remember I was still listening to Joshua, Sherina and Chikita Meidy until I officially converted to non-children music when I heard The Corrs on MTV in my 4th grade. Going Britney Spears in the end of my elementary school, RnB and alternative rock bands in junior high, highly into Japanese Pop/Rock in high school, and for many years in college I settled hearing John Mayer, jazz, classic, mostly acoustic well-played actual music instruments, also a significant number of songs from indie bands. *hipster alert* lol

I never thought I would gravitate towards dance music in my entire life. I used to think that dance music is too loud and uncoordinated and.. my God.. why would people enjoy those weird tweaking synthetic sounds from a computer? why would people call this object a ‘music’ anyway? No lyrics? really? I just didn’t get it.

You know EDM is something that people play in clubs and also raves (large scale parties). I have never been into that situation (and I never plan to go there anyway). But ever since I went to the gym I got highly exposed to EDM. Especially since I was really into BodyJam where the musics were banging the entire room and the moves were really fun. I eventually downloaded the songs and learnt that those were electronic dance music. I didn’t realize it at first but when I did I already have 30-ish songs in my playlist. Dang it.

There’s something about EDM that drives me up high. I’m sure I can’t describe it properly, but I’ll try: you got the beat, and you just wanna dance. That’s all that I can say. See? I suck.
But, really, as the beat drops, the sounds are very rich that got my head occupied and forget everything else. Maybe it’s like happy hormones for your brain but not in a chemical way. uh okay I give up. 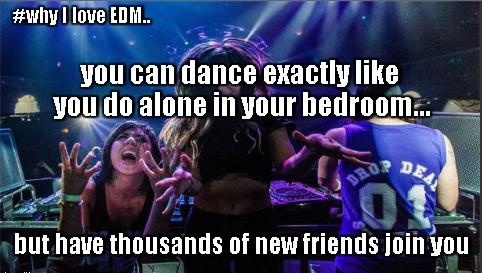 So, rave music, me in hijab, seriously? I know it doesn’t make sense. I might be one of the minority of hijabees who likes to listen to this type of music. haha. but who cares. I mostly listen to House Music, Big Room, Progressive House, with bits of Trance and Trap. Or simply anything that catches my ear.

One of my favorite podcast is from Skink Radio by Showtek. I really like their selection.

Yesterday is a History, Tomorrow is a Mystery

INFJs see two people in everyone. They see the public persona, the outer shell, which everyone else sees. But more important, their Ni provides a deeper sense or impression of people, penetrating appearances and revealing hidden motives and intentions. Consequently, INFJs often feel they can see people more clearly than those people can see themselves.